Posted on September 29, 2014 by CanadianTravelBugs

Last night a peaceful protest in Hong Kong turned into something much bigger which may make change for the future. Demonstrations started with hundred then thousands of young people, mostly university age students. The reason for their assembly to try to influence the changes that may take away some of the freedoms of the people. From what we can gather, Hong Kong which returned to China in 1997, has been allowed freedoms and government to act somewhat independently from the rest of China. News came that this may start to change. 2017 a new process would allow people to vote, but the candidates would be hand picked by the capital, no longer a freedom from local residents to pick their own candidates. The young people took to the streets last night and peacefully blocked roads in the financial district of Hong Kong. The police tried to disperse the crowds by using tear gas, but the people stood strong.

From reports only a few were hurt and the and the crowds remained calm despite the police presence. This says a lot about the people. They are staying put, but without violence, disruption, chaos or rioting. 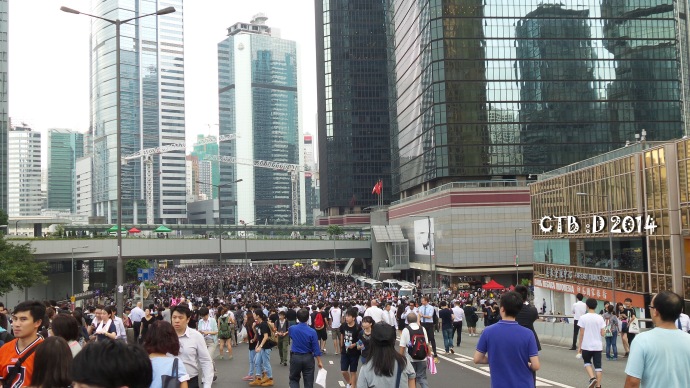 Today we were in the area and went to see for ourselves. At first it looked like a handful of people on closed roads. Someone pointed us further down the road and on the other side of an overpass we were startled by the crowds still there. Signs were posted on cardboard, on roads and barriers. Thousands of young students dressed in black with yellow ribbons of support with eye goggles and face masks sat peacefully on phones or chatting to friends. A few people spoke to the crowd and people quietly applauded. Talking to some of the young demonstrators you can see how passionate they are. They want to fight for freedom, show civil disobedience, but peacefully resist. One young girl quickly explained to me the reason for the crowd and why they had gathered. She stumbled over her English and kept apologising for the errors. She ended with I just want to help. I am here to help the people. She offered me a wet towel and when I refused she insisted.

one of numerous signs to get the message across

Some shops were open, but many closed, but the people were not interested in doing any harm. It overwhelmed me to see the support, passion and how they cared for their city. As visitors many thanked us for coming and showing support. We were offered food, water, cold packs and wet towels to keep us comfortable in the heat. A young man gave us a face mask in case of more tear gas and said if we need anything speak to any of the ‘cooling stations’ which were well stocked with food, toilet paper, cases and cases of water. An elderly woman came with a trolley and in a styrofoam box she passed out hot meals to the students consisting of rice and breaded pork. Men and women in business suits came out on their lunch hour. To many people it was a photo op of selfies, but deep down you could see the care and concern that the future may hold. A young business man said he watched it all unfold from his office building and stated how proud he was of the people banding together, but how they remained calm and in control. As we walked along people apologised for bumping into you, offered you whatever they had. All these people demonstrating would cause quiet the mess, but there was no garbage strewn about. A young protester was carrying a garbage bag and picking up the small amounts of litter that were left behind. Again I was overwhelmed.

Whenever you think protest in a foreign country, or any country, your first instinct should be turn away. We felt safe and everyone wanted to share their message. The genuine thanks for our support, smiles and shaking our hands was like being welcomed into someone’s home. The feeling of acceptance and appreciation was unlike anything I would expect. The diverse groups of people coming together made us realise that this could be a part of history, life changing for many. 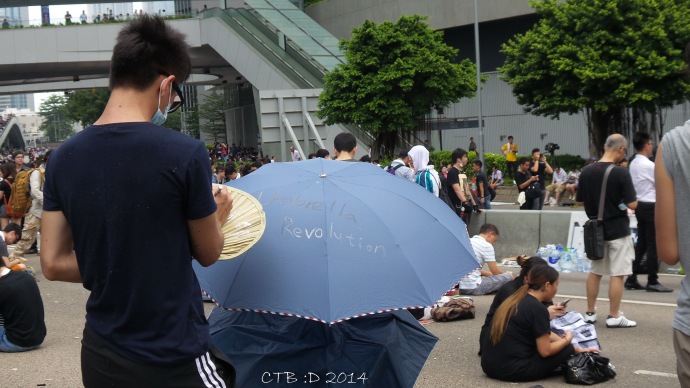 “The Umbrella Revolution” Last night as the police tear gassed the crowds the protesters quickly handed umbrellas out to those closest to the police. They covered themselves in plastic wrap, wore face masks and opened the umbrellas to protect themselves.

WP challenge for this week was NIGHT. This was a pretty historic night…

OK so my pictures weren’t taken at night and we only watched it on the TV because we had just arrived in HK oblivious to the news until after we checked in. It has carried on all day today and I am sure again into the night…